Surface Modeling – What actually is it? 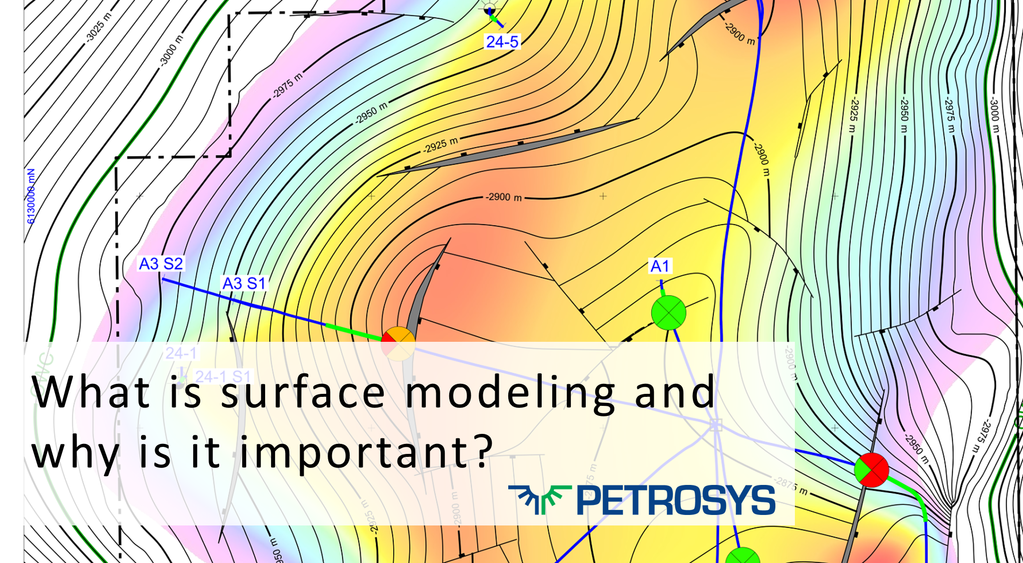 Surface modeling – what actually is it?

One of my colleagues recently asked me a simple question. What is surface modeling and what does Petrosys PRO do with it that users find useful? I have been using computers to model the Geology of the subsurface for more than 30 years, so it should be an easy question to answer but as is so often the case, simple questions can be deceptively complex.

Over the past few days and weeks, I have been involved with a review of some of our marketing material. There has been a need to add some new words and pictures in response to the continuing functional enhancements to Petrosys’s suite of G&G software. It’s a good exercise. Trying to describe in plain English what our software does and more importantly why it can help solve problems that our client base have is sometimes a challenge, but always an education.

When I speak to people of a similar age and experience as myself, we talk the same language. They too understand what surface modeling is. Well, I assume they do. The problem is we all assume that if we understand a term, it is common usage and others also will understand.

For the younger generation of Geoscientists making that assumption is dangerous. In recent years interpretive geoscience has increasingly moved into a 3D world. New computer hardware and software has meant creating 3D models of the subsurface is an everyday experience for Geoscience teams. The detail and scope of these models was unimaginable in my days as a boy computer geologist with BP 32 years ago.

So, what is surface modeling and what do people in the 3D world of 2019 need to know about how it can help them and why it is important?

For people building solid 3D models the important part where surface modeling crosses their eye line is the creation of the structural framework. This is the combination of surfaces/events/horizons/top of reservoir zones with faults to create the outline that will be filled with the solid rock properties making up the model.

The interpretive Geophysicist is the person traditionally responsible for surfaces. They interpret reflective events on seismic representing different Geological events. There is no standard term for the structural events they are picking but they are the surfaces that we are talking about in the term surface modeling.

When 2d seismic was the norm the interpretations had to be transformed into grids using a variety of computer programs down the years. The need for this was two-fold. Firstly, the gridding enabled interpolation into areas with no or sparse interpreted data and secondly, the final grid could be used to display colour filled contours, be used in arithmetical calculations or generate volumetric output.

Move forward twenty years in the predominantly 3D world why should geoscientists still be interested in surface modeling? Surely, with high resolution 3D seismic the job of generating the structural surfaces that create the framework for solid modeling of oil and gas reservoirs is easy.

Here I suppose is the crux of the issue. Sometimes it is simple, other times not so easy.

When there are well defined geological horizons with simple faulting and straightforward depth conversion the geoscientist is lucky. Often the interpretation system they use will give them a pretty good representation of the Geology as a first pass.

What happens when the geoscientist is not happy with the Geological picture that they are seeing on their computer screens. Assuming, they are experienced enough to realise they have a problem, this is where “surface modeling” skills come to the forefront and the toolset that Petrosys PRO has can help to make more geologically believable grids and models.

Petrosys PRO has a wide range of tools that can help. The way we have developed our algorithms helps the first pass be more realistic. This is especially the case where there are complex faults. We have a number of tools from convergent gridding with faults, available at the later stages to help maintain regional trends in faulted horizons, to the ability to generate polygonal faults from fault sticks.

Then there is the Petrosys PRO task list that enables sophisticated manipulation of surfaces to be run, stored and rerun if any of the input data changes. What we do here is substantial and as this was not meant to be a training class, I will leave the detail to another day.

The final tool in the Petrosys PRO surface modeling tool kit is our spatial editor. With this, the Geoscientist has the ability to adapt and craft their models so they represent the subsurface geology as accurately as possible. The ability to edit contours, faults, and grids interactively, then locally regrid to perfect the way you think the surfaces should look is brilliant. It’s one of my favorite parts of Petrosys PRO and I would be happy to show anyone if they have a spare ten minutes one day.

So how have I done? Has my explanation successfully answered the question ‘What is surface modeling? Let me know your thoughts.

“Now, what about ‘Mapping’?”, my colleague asked. Well, that’s a topic for another day.

If you would like to know more about Petrosys PRO contact our team of expert Mapping Gurus.

Contact Us
Ashley Conway2020-03-18T20:21:57+10:30Products|
Subscribe to News
We use cookies to ensure that we give you the best experience on our website. If you continue to use this site we will assume that you are happy with it.Ok
Go to Top